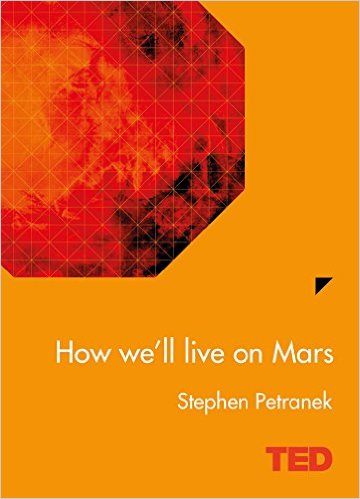 There are times when a book comes into our lives at an appropriate moment. This was one such for me. I’d just spent a few days reviewing the research I’d been doing for a science fiction novel set on Mars. Amongst the websites I’d downloaded to consult on technical issues, I found references to this book. It seemed to be well respected, so I bought a copy.

I’m very glad I did. The text is well written, thoughtful and quite comprehensive and has given me reasons to modify that original story, fortunately before I began the editing process!

Petranek has clearly researched his subject well and consulted many different sources to arrive at his conclusions. His vision of the future for flights to Mars and the possibility of humans colonising the planet is well-considered and based on information and news relating to the space agencies and to those commercial companies that have been set up to explore the red planet.

He looks at all aspects of exploration and occupation of the most well-known of our neighbouring planets. His understanding of the science in all the fields he covers is extensive and he points out the realities of each challenge as well as the potential solutions to the problems. His tone is optimistic but realistic and he produces enough information for the reader to make up his/her own mind about the possibilities of each proposition. That the colonisation of Mars will proceed, there appears to be no doubt. There are, however, doubts about the timescale and the probable initiators of the human exploration of the planet. Will it be a state run space agency like NASA, ISRO, or ROSCOSMOS, or will it be one of the commercial concerns like SPACEX or MARS ONE? Petranek seems to favour SPACEX as the front- runner.

As a source for the science fiction writer setting a story on Mars, this is an excellent resource and it’s certainly given me plenty of food for thought. Food, of course, is a major concern for colonisation and the author tackles the subject with his usual thoroughness. He looks at atmosphere, water, power, transport, human health, terraforming and lots more in this volume.

I found the book both entertaining and highly informative. There’s a good deal of common and uncommon sense on these pages and he makes it clear where speculation lies and where there is good evidential reason to believe in a specific outcome. A very good read.

2 Responses to “How We’ll Live on Mars, by Stephen Petranek, Reviewed.”