You really should have had this update yesterday, as I do them on Wednesdays. But I was actually writing (and, tell the truth, the heavy cold that had me in its clutches throughout Xmas and the New Year celebrations had returned to turn my brain to mush for most of the waking hours).

Today, I appear sentient once more.

The new novel, in Scrivener, is now furnished with the cast of characters (main players, anyway) and I have a list of names in place for new characters as they pop up. That way, I don’t have to stop the narrative to search for a new name.

The story elements are relatively securely lodged in that mysterious portion of my brain that takes over during the creative process. No idea where that region lurks, but I give it free rein once I’m endowed with all the elements and ingredients I need for the story.

So, on Monday, I started writing the book. 3 chapters are now in first draft stage, totalling 4,800 words (yes, exactly, which is a surprise!).

I’m enjoying the process and the story is developing well, already taken a couple of unexpected but exciting turns. My characters tend to do that: take over and decide they’ll go left when I’d considered right; up, when I’d considered straight and level. But they generally know best, so I let them get on with it. All I do is provide the mechanics to place the words on screen via the keyboard. The rest happens by a sort of osmosis I’ve never really understood. Since it seems to work, I’m not about to analyse it into non-existence. 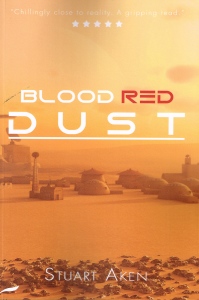 For those who haven’t yet read Blood Red Dust, the first in this projected series of three tales set on Mars, why not, I ask?

A few comments from reviews:

‘Enjoyed? I positively feasted on this book!

Move over Isaac Asimov.
Stand aside Arthur C. Clarke.
Tip your hat Frank Herbert.
There’s a new voice and a quite robust imagination lighting up the sci-fi literary cosmos; and one that speaks with a mythically crisp British accent.’

Cary Grossman: ‘It was amazing.

Where authors and readers come together!
Kaahsh
Sensual Life