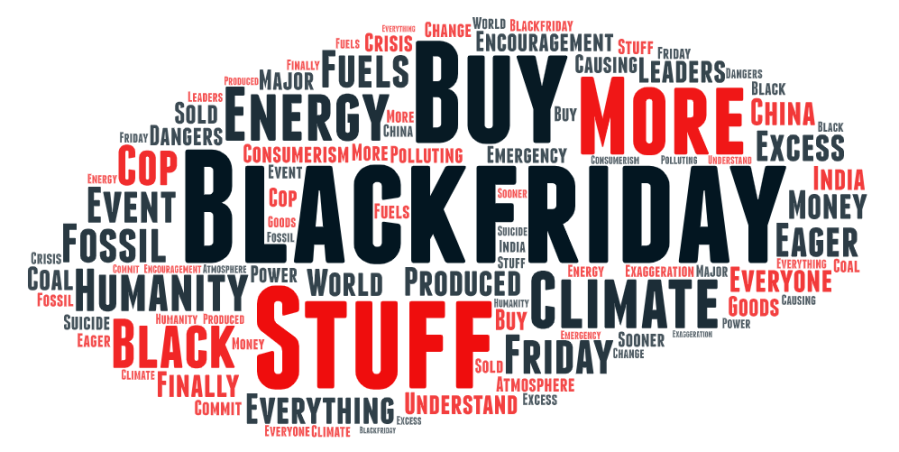 Black Friday: what is this event? Is it really anything more than an encouragement to buy more stuff we don’t need? Is everyone who’s so eager to ‘save’ money even aware of the recent COP26 discussions where world leaders finally began to understand the dangers facing humanity?

So, what has consumerism to do with the climate emergency? Where to begin? Everything we buy, everything, is created with energy. Much of that energy comes from fossil fuels. In fact, in China and India, major producers of goods sold on Black Friday, most energy is produced from coal, the most polluting of all. Fossil fuels are the greatest source of CO2 in the atmosphere, causing the climate crisis. It’s as simple as that. The more stuff we buy, the more we power climate change, and the sooner we help humanity to commit suicide.

Climate change has increased drought in many lands. Overuse of underground sources by agriculture to grow food, means many aquifers are now running dry, and others are seriously polluted. By the end of this decade, that’s less than nine years away, scientists, statisticians, and those with full information in the UN, predict that three billion, yes, 3,000,000,000 people, over a third of the world’s population (7.9 billion), will have too little fresh water to drink and to grow food. Place yourself in those unfortunate shoes for a moment and imagine what’s likely to happen. It’ll start with mass migration. Some of lands that border those in distress will, from a sense of panic or self-defence, begin to ‘deter’ these refugees by shooting them. Inevitably, local wars will break out and from that will grow war on a global scale. Nations with the means and desire will capitalise on the situation, overrunning less able states, spreading death and destruction that will inflame the crisis further. Unavoidably, likeminded nations will gang up on others they see as unfriendly. It’s possible, bearing in mind the proliferation of nuclear weaponry, that some irresponsible, or merely desperate, states will use those weapons we all hoped would prevent such war. What then?

It may seem a great leap to go from excessive buying of goods to the possibility of nuclear war, but it’s almost inevitable. I say ‘almost’ because we, the people, can do something to prevent such an outcome. We need to start, NOW, to utilise less of almost everything we consume. We need to get together to persuade those who pretend to lead us, whether they’re corporation CEOs, elites, politicians, gangsters, dictators, billionaires, bankers, religious leaders, or kings and queens, that if they fail to change their ways, we will take the necessary action to force them. Am I advocating revolution, rebellion? That rather depends on the attitudes and actions of those we perceive to be in charge. The ball, as they say, is in their court.

What we can’t do, as responsible and concerned citizens of any nation, is allow the situation to continue as it is. We’ve already run out of time to talk about the future in any meaningful way. We’re at the cliff edge. What we must do NOW is decide what really matters to us and how we’ll make changes that will at least lessen the coming climate emergency. If we make the wrong choices or decide against acting, the outcome will be the fault of all who hesitate. The future remnants of humanity will judge us, knowing we had the information, the opportunity, and the means to prevent the coming crisis.

So, this Black Friday, please put the future of humanity before the needless purchase of that new TV, sofa, dress, suit, or whatever it is you crave. We can easily live without such things. But we won’t live long on a planet without the means to support our species.