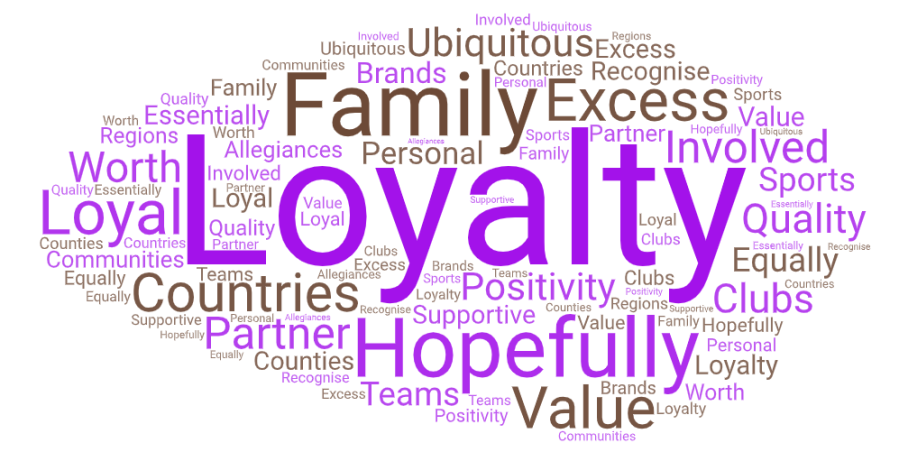 Loyalty, such a ubiquitous word. But what does it mean? To whom or to what are we loyal? We all, hopefully, understand the value and positivity involved in loyalty to our partner; that’s an essentially personal quality. And, equally hopefully, we recognise the worth of loyalty to a supportive family. But beyond these familial allegiances there are many others: loyalty to clubs, sports teams, brands, communities, counties, regions, countries. It’s the latter I explore here.

When we declare our loyalty to our country of birth, what are we truly stating? I’ll use England, part of the UK, as an example, since it’s my land of birth and where I live.

So, if I declare myself a loyal Englishman, to what am I loyal, what do I support? Do I feel allegiance to our titular head of state, the Queen? And, if I do, why? Let’s look at history and decide what that commitment involves. The current royal family owes its position to an invader from France who overruled much earlier invaders, stole land, enslaved the population, and set up a power base founded on the killing of any opposition. Later, that royal line was amended by wars, both foreign and civil, with the last alliance for them originating in a foreign land, Germany, with which we had been and would again be at war.

The Queen is also head of the religious body that holds influence over civil life here. The Church of England was set up by an earlier King who wanted to divorce his older wife so he could marry a younger woman he wanted in his bed to produce a legitimate male heir. The then head of the Roman Catholic Church, the Pope, objected to such an arrangement for reasons that stand up to no logical analysis in current times. The one fortunate aspect of that split with Rome was that this old and profoundly hypocritical religion no longer holds sway over the majority of citizens here. But, as a person of no religion, I’ve no time for any religious organisation that sells myth and legend as truth, so I’ve no reason to be loyal to anyone who heads such an outfit.

Perhaps, then, I can ally myself to the head of Government? But we currently have a ‘leader’ who displays serious signs of mental illness, or perhaps it’s a personality disorder, who knows? In any case, I’ve no political or philosophical allegiance to a man and his gang of cronies who say one thing but do the entire opposite almost always. So I’ve no reason to feel loyalty to that aspect of England.

Okay, perhaps it’s the English way of life I should feel obliged to uphold. Let’s take a quick look at that. What is it to be English? Perhaps it’s pride in our appalling history as a bullying and thieving Empire, where we used military might to lord it over less ‘civilised’ peoples and then enslaved them until we’d robbed them of the bulk of their natural resources. We then left the populations in the hands of native bullies we’d taught to be effective dictators able to steal any further wealth for themselves. Now, there’s a real legacy to be proud of, eh?

Maybe I can find some sense of loyalty in England as a multicultural society? We continue to be open to other cultures to such an extent that we effectively permit forced marriage and the legalised rape it entails, allow the dreadful misogyny of Sharia Law, turn a blind eye to the appalling injustices of allied states, and positively encourage the education of children into belief systems that embrace separatism and inequality. Of course, the reason for this liberalism has nothing to do with generosity from our rulers; it is instead the only way our country can currently attract sufficient labour to support industry by pretending all cultures and philosophies are treated as equals, thereby allowing our head of state to remain our head of religion, and in the process, apparently legitimising a system of control that long ago lost all real credibility.

Finally, perhaps it’s my fellow citizens to whom I should be loyal? Are these the racists, who fail to recognise humans are all one race, emerging as a species from common roots in Africa? Perhaps they’re the landlords, so greedy for profit they allow tenants to live in unsafe, insanitary, sub-standard accommodation? Or maybe they’re the ‘Little Britons’ so scared of anything different that they voted to remove us from an admittedly flawed coalition of nations trying to encourage unity? Unity now so desperately needed under the current threat of the climate emergency.

I look around at the world, continents, regions, and nations and wonder how far our individual loyalty and support has taken us, the people. It’s involved us all in wars we never sought: war is initiated by leaders seeking more power and more personal wealth. It’s involved us in the insane competition, much lauded by the US American Dream, to rape the world for its limited resources in the pursuit of profit with never a thought for the future. It’s involved us in the imminent destruction of the very environment that supports our lives, as we seek to demonstrate we’re the most powerful, most willing, most greedy consumers of utterly unnecessary products we toss away at will.

So, next time you’re persuaded to show your loyalty, I simply ask you to question to whom or what that loyalty is so freely given, and why. It may save the human race.

2 thoughts on “An Excess of…Loyalty”

Guilty pleasures from reading and sewing