A perceptive and informative review of the first book in the Generation Mars series.

The first of Stuart Aken’s ‘Generation Mars’ books takes three major contemporary social drivers – capitalism, religious fundamentalism and liberalism – and transplants them to Mars following economic and environmental collapse on Earth. The story takes the innovative form of a study based on recordings made by representatives of all three drivers with the most positive spin given to utopian liberals The Chosen.

The Chosen make a good case for social and sexual advantages gained by removing the other two, particularly religion. However, these hot-housed super-humans aren’t always the paragons they like to think. They’re not above the odd bit of racism, despite being deliberately diverse. They are also fixated on their beauty and that of their contemporaries, which can get a bit ‘Love Island’. The name ‘The Chosen’ sets off other alarms; their existence is an innate rejection of others. They are to create a whole new race on…

I had a great chat with Drew Wagar, whilst at Fantasticon 2017. This is a great account by one of those in the audience.

This discussion between science fiction authors Drew Wagar and Stuart Aken at FantastiCon 2017 became a mini-masterclass in speculative writing, while also demonstrating there is no ‘right’ way to create genre narratives. 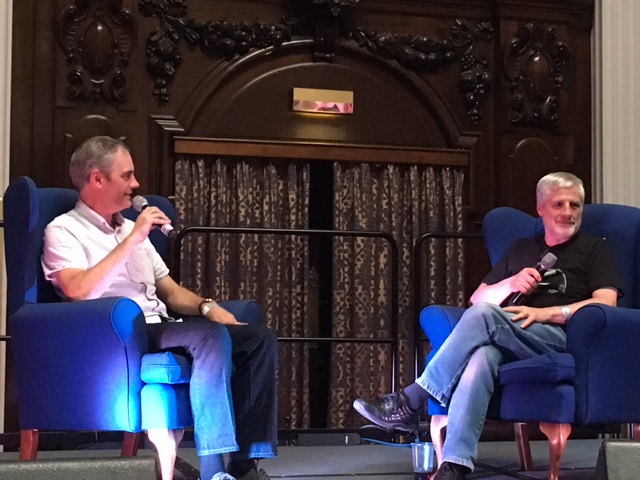 The two authors appear to have much in common. They both write politically-informed science fiction, although Stuart also writes in other genres and Drew has branched out into fantasy with his upcoming ‘Lords of Midnight’ adaptation.

However, Stuart likes recognizable, near-future stories and chose Mars as the setting for his ‘Generation Mars’ book series because it’s the planet we are most likely to get to next. Indeed, one of the challenges in writing the novels was that every day something new about Mars was discovered and it was hard to blend all this new knowledge into the story.

Drew likes Mars as a setting but finds it too close to home. It’s a well-explored world in…