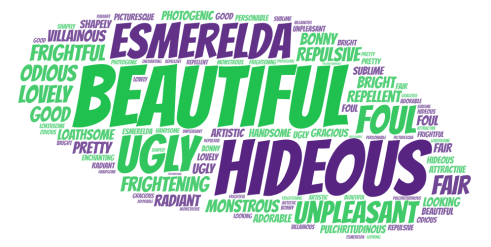 Sometimes struggle to find the ‘right’ word for your writing? I do. Maybe, in trying to improve my own work, I can help other writers.

Antonyms: words that express the opposite of other words can be hard to find, because thesauruses usually give no examples. When lost for such opposites, I reach for ‘The New Nuttall Dictionary of English Synonyms and Antonyms’ published 1986, which generally solves my dilemma.

There are many synonyms for beautiful, including lovely, fair, radiant, bright, pulchritudinous (I can’t think of a word that sounds less like the quality it describes), bonny, pretty, good enough to eat, photogenic, handsome, good-looking, gracious, adorable, picturesque, artistic, sublime, shapely, personable, attractive, and enchanting. An interesting comment on the almost inevitable sexist nature of language: ‘beautiful’ is more often used to describe female looks than male.

‘Beneath the chill blue of a winter moon, and silent as a tomb, sliding from the murk of swampy mudflats slithered the most hideous serpent ever to confront Esmerelda. It was the last living creature she saw, and the hideous slurp of its engulfment of her petrified form was the final noise she heard.’ A touch of purple prose here, to illustrate the gentle art of overdoing it.

‘Esmerelda, cloaked in gossamer moonlight and crowned by flowing locks of golden hair epitomised the very essence of what Gordon considered beautiful. Watching her dragged into the maws of the beast made a lasting impression on all who observed her fate.’ An equally faulty description intended to expose the dangers of employing visual and literary clichés.

Adverbs: words we all use incredibly often, lazily taking the easy route instead of diligently looking for stronger verbs.

Hopelessly: an adverb that conveys the idea of despair, pessimism, suicide, and the inconsolable among other things.

Usage for hopelessly: ‘Gordon understood he was hopelessly in love with Esmerelda, but was blinded to the reality of his situation by that same adoration.’  Something, perhaps, from a poorly written romance? How about, ‘Gordon’s love for Esmerelda hid her total indifference from him.’?

Plain-Language Alternatives for Wordy Phrases: some writers, especially those new to the craft, use more words than necessary. We can often substitute a single word for a phrase.

Have an adverse effect on: an expression that means to damage, hurt, delay or harm.

Hidden ambush: an ambush is a situation in which at attack occurs through deception and/or disguise. An attack that signals its intent can’t be considered an ambush, so the descriptor ‘hidden’ is unnecessary here. Ambush can and should stand alone.

And, from now, there’ll be my own, hopefully humorous, definition of some common words for your entertainment, which I’ll list under The Delusional Dictionary.

Habitué: someone so obsessed with a scene, location, event or person that they are blind to all alternatives.

Your observations and suggestions are welcome in the comments section below. And, if you’ve enjoyed this post, why not use the buttons to share it with your friends? Thank you.