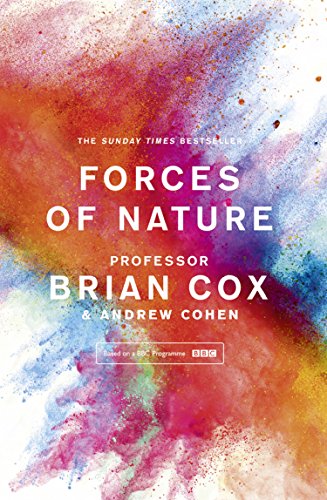 This surprising book exudes the author’s enduring sense of wonder and delight at the natural world. Such qualities, when demonstrated by a leading academic, who is also a well-loved and respected TV presenter, can motivate and inspire. I hope many non-scientists read this book.

Not an ‘easy’ read, it demands attention and concentration. But it does explain, where possible in layman’s terms, the fundamental forces that control how things are made in this extraordinary universe we occupy. Acknowledging the roles of early pioneers, and explaining the history of discovery, Professor Cox builds pictures of the way brilliant minds have come to understand the way things work in nature.

If I have a negative comment, it’s only that some early equations in the book would benefit from a few more labels to identify the quantities and qualities described. As the book progresses, however, these very issues, that I imagined were an assumption about readers’ mathematical skills and knowledge, are made clearer: the later formulae are better labelled. For someone like me, with all the mathematical aptitude of an artichoke, some of the workings might just as well have been written in Klingon. But that’s my problem, not the book’s.

It’s refreshing to find a scientist, a popular one at that, so willing to explain at length that science is not a fixed or exact thing. Its methods, however, are subject to peer scrutiny and its theorems require proofs to reach that status. Science is an area of endeavour where simple speculation coupled with a belief system is no substitute for factual information and a serious attempt to discover the realities. It’s refreshing to find this mind-set in a scientist of Professor Cox’s stature, since there are, unfortunately, scientists who treat their discipline in the same cavalier way that most religious authorities treat their beliefs: as if somehow the very fact that they believe their myths should render them beyond question.

I read this book as background research for a science fiction novel I’m writing. I’m very pleased I did! It’s caused me to reconsider certain elements of the future I’m portraying and prevented me appearing more foolish than I might otherwise seem: I’ve discovered that certain ‘facts’ in some fields are not quite what some proponents have declared them to be.

This is a book about the forces of nature. Four of them that form the basic ‘building blocks’ of how the universe, and everything in it, is structured. It’s a truly fascinating read, peppered with amusing comments and presented in a very readable manner. What could so easily have been a dry textbook, is actually an entertaining and informative piece of accessible writing. I wish I’d had teachers with Professor Cox’s ability to explain things in an engaging and inspiring fashion; my school education would have taken an entirely different and more useful route!

Readers with little scientific background may find some of the explanations difficult to comprehend, and those, like me, with poor maths, may have problems understanding some of the proofs. But the Professor makes allowances for these holes in our education and finds ways to make clear what might otherwise be obscure. It’s an intriguing and inspiring read and, having thoroughly enjoyed it, I fully recommend the book.

A bit of additional info for readers here on the blog. The notes about maths stem from the fact that I left school at 16 having failed my maths ‘O’ level GCE. This was partly due to my deeply sarcastic and self-serving maths teacher, but mostly because I was in deep grief over the death of my mother just 2 days after my 16th birthday and only days before the exam. I re-took maths ‘O’ level the following year, whilst training with the RAF, and passed it. But my maths has never been up to the standard needed for this book. So, don’t let your lack of maths stop you reading the book. It’s a brilliant piece of work.