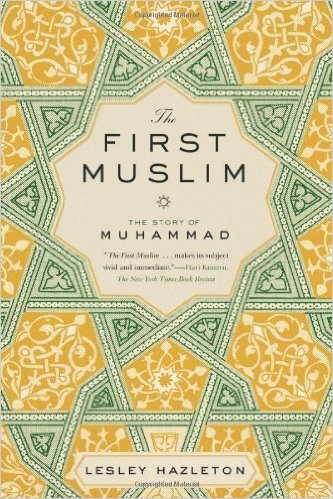 Subtitled, ‘The Story of Muhammad’, this scholarly and meticulously researched book provides answers to many common questions about the Islamic prophet. As an agnostic (It’s impossible for humanity ever to truly ‘know’ whether God exists or not, since such a power must, by definition, be far beyond our comprehension) I have an interest in the driving forces behind religion. This book gave me information I hadn’t previously accessed and repudiated certain rumours I’d heard, whilst portraying this man and the religion he represents in a way that both confirmed and illuminated some of my preformed impressions.

The author consulted many Muslim scholars and original works in order to come to some understanding of the man, his times and society, and the truths and myths surrounding his life and the subsequent compilation of the Qur’an. I’ve read the Qur’an, the Bible, and other religious tracts: I prefer to be informed.

This biography is well written and manages to keep a relatively neutral viewpoint most of the time. Writing about a man who has followers eager to kill anyone daring to disagree with their particular interpretation of the many myths, legends and facts is fraught with danger, so I applaud the author for her courage and her ability to present information without overt opinion, bias or fear of consequences.

This is a book everyone should read: believers in other religions, so they know why Islam is the way it is and thereby gain a greater understanding of how faith can be generated; Muslims of every variety, so they acquire knowledge of where their faith was born and how some of their brethren have entirely misinterpreted the original intentions of their prophet; Atheists and agnostics for the facts it contains that will undoubtedly strengthen their arguments against religion in general.

There are many clues about how original truths have been distorted and abused through the ages since Muhammad’s death, recorded as occurring on 8 June 632 using the Gregorian calendar. In common with the various Christian churches’ misappropriation and abuse of Jesus, the Islamic world has clearly taken facts, myths and what amount to fairy tales to mix various concoctions that, in many cases, completely counter the intentions of the originator of their religion. Power and the desire for control have ruled religion over aeons and this book demonstrates how much that unfortunate abuse of good intentions has distorted the original message of the prophet all Muslims claim to love. It also makes clear how the growth of power resulted in the inevitable growth of corruption: there’s a reason for the adage, ‘power corrupts and absolute power corrupts absolutely’; it’s called experience.

It’s a truly sad fact that worshipers will generally believe what they wish to believe regardless of facts, history and even the aims of the man they claim to worship. That all sacred texts, and especially the Qur’an, are open to interpretation, and therefore misinterpretation, only proves to the free-thinker that such works have nothing whatever to do with any supreme power called God, Allah, Buddha, Jehovah, Zeus, Brahma, Shiva, or any of the millions of other names ascribed to an ultimate power. And this book, read with an open mind, lends weight to that rational point of view.

It’s even sadder that believers will read this book and find in it evidence of the basis of their faith. People of other faiths may well see the underlying revelation of fundamental truths about the nature of religion, but will probably find it impossible to apply the same conclusions to their own faith.

Those who recognise faith as a human need that’s been badly served by religion will garner new evidence to support their suspicion and rejection of those organisations that have distorted spirituality into a means of controlling people in order to create a power base.

Read this book with an open mind and it just might startle you into a new realisation of the truth.

One thought on “The First Muslim, by Lesley Hazleton, Reviewed.”