Valerie and I have often wondered about a place called Puzzlewood that lies close to Coleford, in the Forest of Dean, about 5 miles from our home. We decided to give the place a visit for her birthday, yesterday. It has been used as a location for scenes in Dr Who, Merlin, Arthur, Starwars and is considered as one of the places that inspired JRR Tolkien’s creation of the forests of Middle Earth, so many of you may recognise some of the places shown in these shots.

The tracks run throughout the area, with stepping stones of wood for the wet weather.

The place is very popular with schools, especially in the warmer weather. But it can also be very quiet. 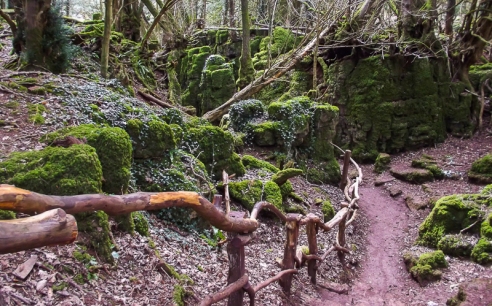 They use fallen branches from the many ancient Yew trees to form barriers and handrails.

Set in 14 acres of ancient woodland, the site has over a mile of twisting tracks with 200 steps to take visitors through the weird rock formations. 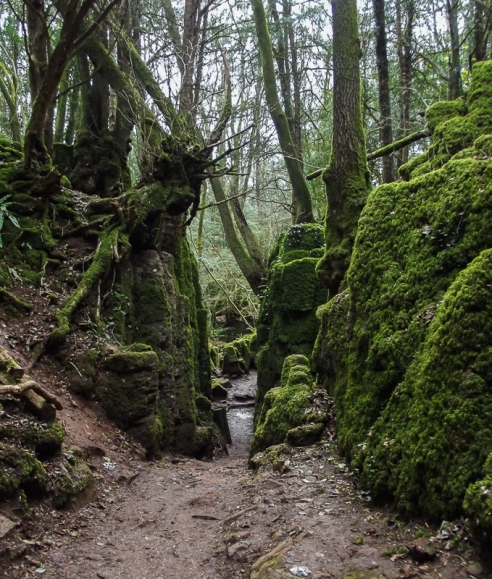 The geological features are called ‘scowles’. They are the result of erosion on ancient caves.

Some of the tree roots form grotesque sculptures.

Iron Age settlers mined the area for the iron ore that was exposed by natural erosion. 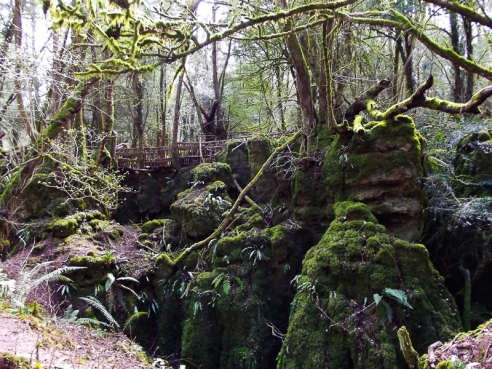 The mix of rocks, moss and ancient trees gives the place a magical quality.

The Romans also mined for iron ore. 3,000 roman coins were discovered by workmen in the forest in the 1800s.

It’s fascinating to see how tenacious is life as the trees appear to grow from the rocks.

Many different trees grow in Puzzlewood; oak, ash, beech, yew and lime amongst them.

Yew has a particular liking for iron ore and pushes its roots into the crevices in the rock in search of this mineral.

What at first appears as a branch of this yew turns out to be a thick root crossing a chasm!

There is an abundance of wild garlic, scenting the air in the spring.

Plenty of greenery grows on the slopes between the rock outcrops.

Bluebells flower in the early months. Ferns decorate the place in summer.

A quaint yew seat provides a resting place for the weary.

Some of the passageways are eerie, as they plunge and wind between the steep rock outcrops.

In places, you can see the origin of the passages that were once caves underground.

Puzzlewood is a great place for a day out either as adults or for children. There are some interesting animals and activities provided for kids. We encountered once such party of youngsters, but they were well behaved and didn’t spoil the peace of this magical place.

15 Responses to “A Walk in the PuzzleWood from the Movies.”